Wild Goose takes home three Platinum and one Double Platinum award at the recent “Best of the Best” competition hosted by Wine Press Northwest.  The winning entry was our 2013 Mystic River Pinot Blanc, which incidentally also won a Double Gold at the All Canadian Wine Championships and the #1 White Wine of the Competition at InterVin 2014.  Platinum awards were also given to our: 2012 Red Horizon Meritage, 2013 Pinot Gris, and 2013 Gewurztraminer.

How the Platinum is Conducted

Wine Press Northwest created the Platinum Judging in 2000 as a way to determine some of the best wines each year in the Pacific Northwest.

To accomplish this, we chart more than 35 professionally judged wine competitions worldwide to track the gold medals won by wineries in Washington, Oregon, British Columbia and Idaho.

In 2014, Northwest wineries were awarded more than 1,700 gold medals at professional judgings.

The wines are categorized and judged blind during three days by two panels of wine experts, who award wines with Platinum, Double Gold, Gold or no medal. A wine is awarded a medal based on how a majority of the judges voted. In the case when all four judges deem the wine a Platinum, that wine is awarded a unanimous Double Platinum.

Based on each judge’s score, we are able to determine which wine or wines end up at the top — the best of the best.

Mystic River is Wild Goose’s estate vineyard near Oliver, British Columbia, and through the years it has produced seven Platinum wines, including three Pinot Blancs. If there were such a ranking, Mystic River would certainly qualify as a grand cru vineyard in the Pacific Northwest. This example is loaded with aromas and flavors of lime, pear, apricot, kiwi and white peach. It’s easy to imagine this with shellfish, chicken or pork. Medal: All Canadian Wine Championships (double gold) 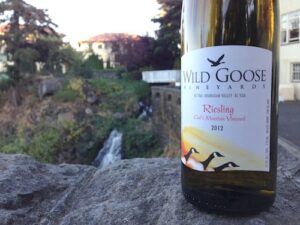 An informative podcast about the Great Northwest Invitational Wine Competition

The top wine in the Great Northwest Invitational Wine Competition was Wild Goose Vineyards‘ 2012 God’s Mountain Vineyard Riesling from British Columbia’s Okanagan Valley. This came as no surprise to us as Wild Goose has been crafting some of the Pacific Northwest’s best wines for years. The winery operated by brothers Hagen and Roland Kruger is a past Pacific Northwest Winery of the Year with Wine Press Northwest magazine.

This is the final vintage for this particular vineyard-designated Riesling for Wild Goose, as the viticultural practices changed and the Krugers are now choosing to focus on their own Stoney Slope Vineyard, which was planted 30 years ago.

In addition, Wild Goose’s Gewürztraminer also won a gold medal – again, little surprise because of the stunning acidity available in the Okanagan Valley. 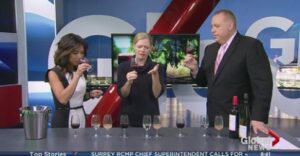 GLOBAL NEWS: GRAPE MUST VS WINE

The second vintage of Wild Goose Horizon Meritage Blend wins Gold at the 2014 BC Wine Awards; it was the only Meritage Blend to win a Gold at the competition.  Winemaker Hagen Kruger confirms, “This is an outstanding achievement for Wild Goose.  We’re thrilled that our meritage blend is gaining recognition in this category.”  The Red Horizon Meritage is made in a traditional style blending Merlot Reserve (made from 100% free run juice), Cabernet Sauvignon, and Petit Verdot.  Earlier this year Wild Goose Winery became a member of the Meritage Alliance based in Calistoga, California.  The Meritage Alliance is an association formed to identify and promote handcrafted wines blended from the traditional “noble” Bordeaux varieties.

Wild Goose also took home a Gold for the Classic Pinot Gris and Silver for the Autumn Gold and Mystic River Pinot Blanc as well as several Bronze medals.  Visit the BC Wine Awards for a complete list of winners.

Beginning  Wednesday June 25 the Smoke & Oak Bistro will now be open seven days per week.  “We’ve had an outstanding response to the Bistro” says General Manager Roland Kruger, “it’s evident that the demand for amazing barbeque and reasonable prices is strong in Okanagan Falls so we’ve decided to keep the Bistro open seven days-a-week throughout the summer.”  Menu items include smoked ribs and cornish hen, German Spaetzle and potatoe salad, and fresh seasonal greens picked from the patio garden.  Chef Sarren Wolfe also makes daily soup and salad creations to enjoy on the vineyard view patio.  Reservations call: 1.877.497.8919.  Bistro is open 11:00am – 4:00pm.